After more than a decade we have now established incontrovertibly the correlation between the quality of narrative in listed company strategic reporting and better than average market performance by a company. If there were any remaining questions as to the validity of this assertion, we have now answered them in the review of our longitudinal research into strategic value added by companies in their corporate reporting. We are publishing the proof in the performance of our notional retrospective ‘Short-listed for the Accolades Fund’ commencing in 2008. It has invested since then each year in the companies short-listed for the FutureValue-assessed strategic value reporting awards. The performance of the fund has surprised even us. The strength of the correlation raises questions that demand answers: what is the nature of this correlation; what does it suggest about future reporting?

The output from our research review – this ’Short-listed for the Accolades Fund’ – is illustrated in the chart below. It shows that companies short-listed for the Accolades have collectively and massively out-performed an indicative FTSE350 tracker fund that would have matched the FTSE350 index in performance over the same period. At closing prices on the last trading day of the month [28/08/15] preceding the most recent Accolades [30/09/2015] the Short-listed Fund had grown by 73.47% to £36,428, while the FTSE350 tracker had grown by just 15.73% to £24,304. Each of these notional funds had started with £21,000 on 1 April 2008. 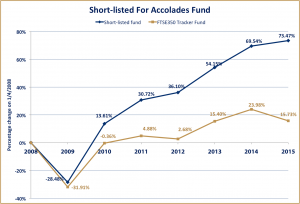 So, what are the companies that the Short-listed Fund has invested in and what are the rules of the fund? It will help to appreciate first the context and the demographics. FutureValue had been aware of a correlation between narrative reporting and market performance since conducting related research for the Kingsmill ‘Accounting for People’ Task Force Review in 2003. More recently, and since 2008, we decided to recognise excellence in the strategic value in corporate reporting, first in tandem with the Strategic Planning Society and more recently since 2013 as the FutureValue Strategic Report Accolades. Each year we have made between six and nine qualifying awards with an average of four companies short-listed for each. We have short-listed 79 companies from more than 30 sectors over eight years – some companies for more than one award in a year and many for more than just one year. There is some constancy with around half of companies short-listed in consecutive years. Indeed, one company – Land Securities Group – has been short-listed every year since 2008 and sometimes for one or more award each year; it has won two Accolades. The annual number of short-listed companies has ranged between 16 and 27. There are no external nominations for the Accolades. Qualification for the short lists is simply the publication of an exemplary Strategic Report, as evaluated and determined by FutureValue’s research team. We have also added the Best Governance Report as a new award this year, recognising the growing power of good governance reporting.

The rules of the Short-listed fund have been quite simple. We invested £1,000 in the each of the 21 original 2008 short-listed companies. At the month-end preceding each annual awards presentation we have valued the fund made up of the preceding year’s short lists. We have then notionally disposed of the holdings in companies not short-listed again and re-invested the proceeds of disposal across all the new short-listed companies. The only variance in the amount invested per company at that point is to fix the amount invested in new to the short lists in that year – i.e. not also short-listed the previous year and therefore brought forward in the fund – to £1,000, to match our original allocation per company. Notably, the churn has been quite significant. In 2011, 2012, 2013 and 2014 we have had to re-invest annually around half of the Fund’s value in the new short list [between 46% and 55%].

So, if the results of the research review are impressive, what does the outcome of the Short-listed Fund actually show? An effective Strategic Report demonstrates a lot more than purely effective corporate communication. It says more about what is happening inside a company than is immediately apparent in the narrative. Strategy is about the past, the present as well as the future. The best Strategic Reports illustrate a capacity for strategic management that, when well articulated, transcend into evidence of strategic leadership and positive future growth in the Report user’s mind. For shareholders and prospective investors it reduces uncertainty about the future. For other stakeholders a good Strategic Report increases confidence in the company in which they have an economic or societal interest.

There are additional challenges that may well distort the best strategic value focused efforts of reporting companies going forward. As the IIRC’s Integrated Reporting framework gains traction it is having an impact on how many FTSE100 companies report. We have seen this year how some are now adopting elements into their Strategic Reports in their own IR-lite reporting style, shunning a separate Integrated Reporting document. We will also see from now on the influence of the far-reaching 2014 changes to the UK Corporate Governance Code. These will impact beyond the Governance Report in how companies address longer-term viability, report risk and reconfigure their KPIs. While fresh challenges abound they are unlikely to change the core reality. A company that aspires to the highest standards of strategic management and strategic leadership, and then expresses those aspirations and achievements effectively in its Strategic Report will surely benefit from market support, as our Short-listed Fund amply demonstrates.

A detailed list of the fund comprising the 2014 short-listed constituents and their values at 28/8/15, plus the succeeding 2015 short-listed companies is available on request here. We are also continuing to advise companies on how to aspire to these highest standards in preparing their upcoming Strategic Reports and Governance Reports.

Narrative in strategic reports remains for most companies a matter of mere compliance. What needs to happen for investors to trust reporting narrativel?

There has been much water under the corporate reporting bridge since our last blog. The only constant is change.

Despite smug self-acclaim, principles-based reporting has never really worked effectively in the UK. It is time to switch to a rules base.

The annual Larry Fink letter to CEOs of BlackRock invested companies raises the bar for what is expected of them, with ramifications for corporate reporting.

Read more...
Back to Blog